About Us
Family-owned Winery Nestled in Temecula Wine Country

The family vibe can be felt immediately when stepping foot on the beautiful Wilson Creek grounds right in the heart of Temecula Wine Country. It’s the kind of place where you just release a deep sigh because you feel at home. The atmosphere is not to be outdone by the fine quality of award-winning wine, gourmet food, and bustling tasting rooms. Wilson Creek Winery also hosts many weddings, private events, and concerts throughout the year. Good things are meant to be shared, and the Wilson family is remarkable at building their extended family community.

It’s not uncommon to find one or many of the Wilsons on property.
If you happen to see one of them, say “hi” and introduce yourself! 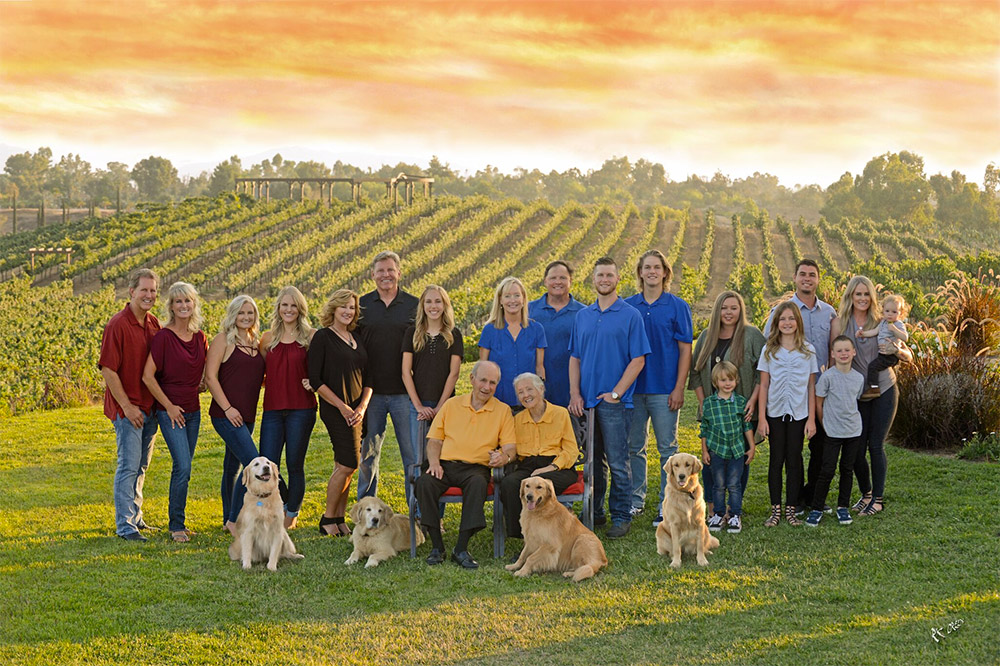 The Wilson experience and commitment demonstrates itself in the success of their numerous events, weddings, concerts, accommodations and charity functions that parallel a broad selection of award-winning wines. Home of the famous Almond Sparkling Wine (formerly known as Almond Champagne), the winery has garnered numerous prestigious wine awards. Gerry is especially proud that Wilson Creek is the unofficial winery of many Navy ships, including eight aircraft carriers. Wilson Creek has been an innovator in the local business community having garnered several awards including four-time Business of the Year, Entrepreneur of the Year, the Best of San Diego and Best of Inland Empire and Couples Choice award from Wedding Wire several times. Wilson Creek also sparked the attention of Hollywood and has been featured on the Today Show with Kathie Lee, Radical Sabbatical which aired on the Fine Living Network, the syndicated show Blind Date, Millionaire Matchmaker, Love Connection, Animal Planet, and the MTV show Dismissed just to name a few. Bill (C.E.O.) recognizes the contributions made by the Temecula Valley to the early success of Wilson Creek and now he seeks to give back by supporting various events and causes. Bill serves on several Temecula Valley boards sharing his experience such as the 20/20 vision, Temecula Valley Visitors Bureau, Temecula Valley Winegrowers Association and the Temecula Valley Water Board. That initial leap of faith and an unwavering dream built Wilson Creek Winery to its current state. It is a destination in Temecula wine country where friendly service, great tasting wines, and entertainment are commonplace now. Gerry’s response when reflecting back many years ago to that leap of faith is, “Sure, I do miss South Pasadena. We lived there for 30 wonderful years.  Yet, I love wine country. The main thing is that this is a family-run business. I love the fact that all my children and grandchildren are here. My commute is about 200 meters through a vineyard with a cup of coffee in my hand. We look forward to a daily routine of meeting our many guests, sharing a glass of wine with them, and welcoming them into our extended family. We are very blessed!”