Emmanuel Community Demonstration Garden, Fullerton, planted a small vineyard called the ‘Back Forty’ in 2014. With approximately 100 vines, four rows of Merlot and four rows of Zinfandel, this vineyard serves more than just wine drinkers. After two years of growing, we had our first vintage in 2016. Our aim was to produce sacramental wine for the Church along with wine for our Guild members. We had reasonable/drinkable quality wine that continued to improve each year.

However, during the 2018 Harvest, we noticed that several bunches of grapes had dried up like raisins and the leaves were blotchy thus turning red and dying. The harvest in 2019 wasn’t any better! The vines contained many red colored leaves, which dropped off the vine and brought along the shriveled-up grapes with it. So, we set about finding answers to our problem. After much research and consideration, we thought it was a possibility that we had Pierce’s Disease. What is Pierce’s Disease you may ask? PD is a disease that affects grapevines and is prevalent across the US spanning from California to Florida. The contents of this disease infects different plant hosts and negatively affects the yields of many economically important crops-many more than just grapevines!

Through our research, it was recommended that we join the Temecula Valley Small Wine Growers Association. During the first session we attended, on Zoom, they were talking about Pierce’s Disease. Greg Pennyroyal, Vineyard Manager of Wilson Creek Winery in Temecula, and leader of the association, had instructed concerned grape-growers to drop off samples of their vines to be sent off and tested for this deadly disease-PD. After receiving a plethora of samples, he promptly sent them to their testing site in hopes of being able to salvage vines for the concerned vineyard managers.

A few weeks later, we learned that unfortunately, all of the samples had PD. Although the disease is not harmful to man, it is a death toll for many vines. Because there is no real way to stop this disease from overtaking the vines, the only alternative was to dig them all up and plant anew. This time, we made sure to plant a disease resistant vine that would last and not be overtaken.

We arranged to meet Greg and his foreman, Pedro, at Wilson Creek Winery to discuss our situation and to get their expert advice. Greg shared that he and Pedro had some work planned in Rancho Cucamonga in a couple of weeks and that they would be glad to come and visit our vineyard before returning to Temecula. 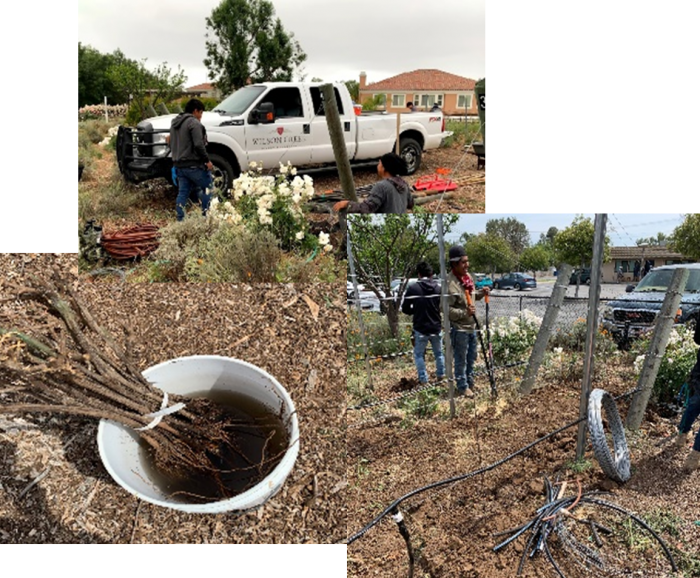 Greg was pleasantly surprised with what he saw, saying that it was one of the best designed private vineyards he had ever seen-which meant the world. As they sauntered through our vineyard, Pedro began brainstorming how they could help. He concluded that they would send a group of skilled vineyard workers from Temecula to come and replant our vineyard with vines known to be resistant to PD. We set about preparing our vineyard for replanting.

On March 28, 2021, a Wilson Creek truck appeared in our church parking lot. Before we knew it, we had a crew of 12 helping us revitalize what used to be our prized possession. They worked like a well-oiled machine, each worker knowing precisely what to do. With few breaks, the crew finished the job just before 1pm. Not only had they planted 100 or so vines; they had tied them up to newly placed stakes and modified the watering system for the entire vineyard.