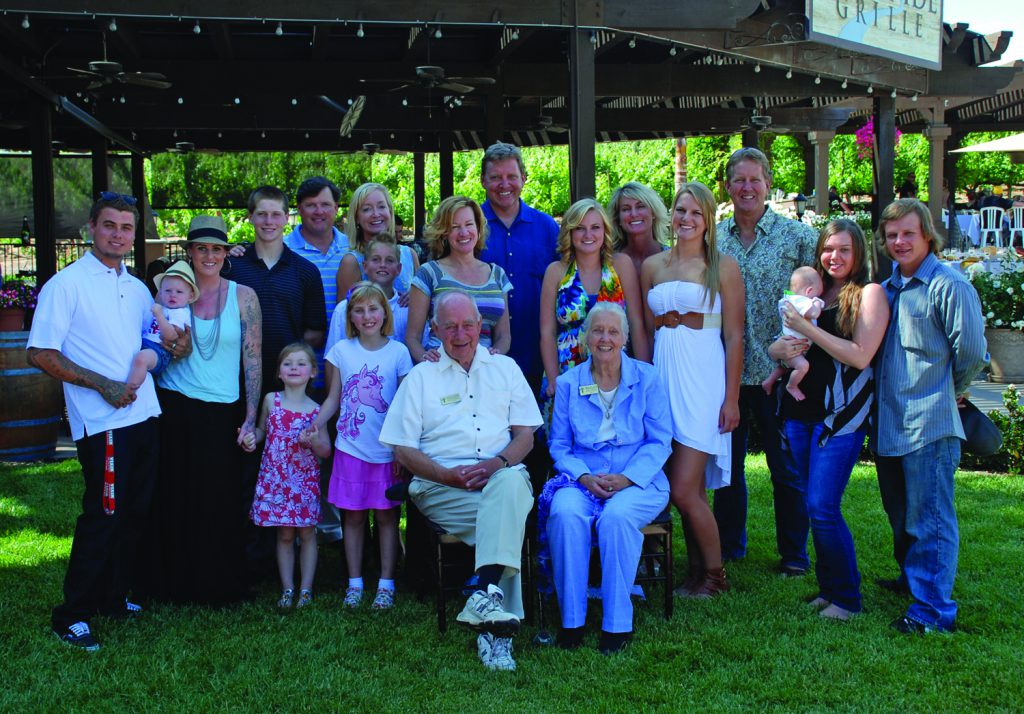 you would be running your own winery and living in Wine Country?

Here lies the story of one South Pasadena couple and their adult kids who made a dramatic change.

Gerry, Rosie and family gather together for a picture on Mother’s Day, in front of the Creekside Grille, at the winery.

In 1995, retired Gerry and Rosie Wilson were planning a move to Solvang to be closer to their daughter Libby and her husband Craig.  Their son Bill called Rosie & Gerry one day to ask them if they wanted to buy a winery, and they told him he was crazy but it sounded like fun! Bill reminded them that they made dandelion and rhubarb wine in Minnesota. Rosie’s reply was, “I don’t think that qualifies us.”  Bill found out about a small affordable winery for sale and thought it would be ideal for the Wilson family.  The family visited and emotions quickly took over. They absolutely fell in love with the concept and decided to figure out a way to make it work. They sold their homes, quit their jobs and moved to Temecula to pursue a business in which they had no previous experience. Many of their friends thought they were crazy! After Rosie & Gerry re-located, the owner of the small winery decided not to sell. Not wanting to give up their vision, it forced the family to frantically look for another winery or existing vineyard. They found and purchased an existing vineyard and “planted” a building.   They moved into “Operation Bootstraps” mode.  Gerry says, “All of us rolled up our sleeves and did whatever it took to make it happen.  Our saying was, if you are a Wilson, you only have to work half days and you can decide which 12 hours you want!”

With no real background in vineyard management or winemaking and no winery built at the time, they relied on local experts in Temecula Valley to guide them.  They hired a winemaker and vineyard consultant while Gerry and Bill enrolled in some winemaking classes at UC Davis. Bill drove the tractor and oversaw wine production and maintenance of the vineyard.  It was quite a different lifestyle than the suit and tie lifestyle Bill and Gerry were used to, but they LOVED it!
Through hard work, perseverance & determination, they opened for business in 2000. What the Wilson family brought to Temecula was a warm family environment and a history of throwing great parties. They built a winery which today is known as the “fun winery.”

Wilson Creek Winery has come a long way…
Their experience shows in the success of their numerous events: weddings, concerts and charity functions that runs right alongside of their award-winning wines. “Home of the famous Almond Champagne,” the winery has garnered numerous prestigious international wine awards, and their production has increased to approximately 50,000 cases per year. Gerry is proud that Wilson Creek is unofficially the winery of many Navy ships, including eight aircraft carriers. Wilson Creek has received several humanitarian awards and has even sparked the attention of the Hollywood film industry. Wilson Creek has been featured on the show “Radical Sabbatical” which aired on the Fine Living Network, the syndicated show “Blind Date”, as well as the MTV show “Dismissed” just to name a few.
The entire family is still involved.  You can feel the energy and personal touch when you visit the large tasting room. Visit with the family members who are always on the property.  The ambiance of Wilson Creek continues to be very warm and welcoming. Among the many guest favorites, the award-winning Chocolate Port is served in an edible chocolate shot glass for an extra special touch.
Wilson Creek is nestled seven miles East of Interstate 15 on Rancho California Road in Temecula Valley Wine Country.  A mere 75-minute drive from Los Angeles and 50 minutes from San Diego make it a destination to be fully enjoyed.

Gerry’s response when asked if he would move from South Pasadena and start a winery again: “Sure, I do miss South Pasadena. We lived there for 30 wonderful years. Yet, I love wine country. We are still learning and growing. The main thing is that we all work together, and I love the fact that all my children and grandchildren are here. My commute to work is about 200 feet, walking through a vineyard, with a cup of coffee in my hand. I am very blessed!”