Temecula is relatively a new California wine growing region. The first vineyards were planted in the late 1960’s and early 1970’s. Wilson Creek Winery is home to some of those early plantings, with a block of Cabernet Sauvignon planted in 1970. It is difficult to envision this valley before grapes, but prior to the 60’s this valley was home to Vail Ranch and lots and lots of cattle.

Temecula was a tiny little cattle town during the prohibition times, and certainly no grapes were grown here for winemaking. You would need to travel a little north for that, near the town of Wineville to find grapes.

Don’t feel bad if you don’t know Wineville, the town changed its name to Mira Loma in 1930 prior to prohibition and the grapes that grew in the area were no longer used for winemaking. As luck would have it, the area grew a fair amount of Alicante Bouschet.

Alicante Bouschet is a very unique grape in that its flesh is also red, an extremely rare trait in wine grapes. 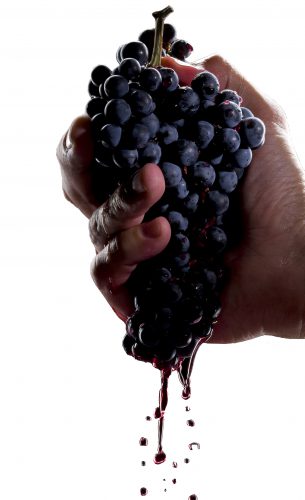 Other red varietals like Merlot, Cabernet Sauvignon, and Zinfandel have red skins but their flesh is white. In addition, Alicante’s skin is very thick and it is very resistant to rot. These features made this grape ideal for train shipments to the east coast, where people of winemaking descent would buy train loads of it for who knows what (wink, wink).

Some of these pre-prohibition grapes survive today in the Rancho Cucamonga, Mira Loma area. The advanced age of these grapes makes for a truly outstanding dessert wine when fortified. The late harvest and fortification process produces a wine with deep plum, chocolate, and black cherry flavors.

Temecula may be a young wine region, but Southern California is certainly not, with history going to pre-prohibition. Who knows, but I’m curious on how the unique wine history of Temecula will develop.

This Alicante Bouschet wine is so special we’ve included it in the special July shipment along with a Moscato D’ Piemonte found in the beautiful and famous region of Piedmont in northwest Italy. We also have the 2015 Petit Verdot, this wine originates from a beautiful and historic grape that is used as one of the red grapes in the prestigious wines of Bordeaux, France. We packaged the Petit Verdot with our Explorer Series from South Africa, the 2015 Pinotage. Pinotage is a crossing of Pinot Noir and Cinsault vines, truly a “foodie wine” made in the old world style. Learn more about these wines by watching the videos with our Winemaker Gus Vizgirda on our YouTube Channel!

Don’t miss out on next years Special Edition Shipment and many other fabulous amenities by joining our Extended Family Wine Club!

« Your Full Weekend In Temecula!